Our Chesapeake, VA Painting with a Twist Artists 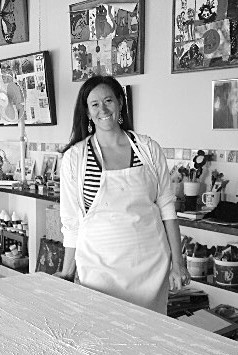 Lynette Hulse lived in Rome, Italy from 2008-2012. In 2009 she had her first solo exhibit in the American Embassy of Rome and another solo exhibit in 2010 titled "Circled Series". While in Italy she learned Italian and immersed herself both within the culture and in the artist community. She moved to Brasilia, Brazil from 2012-2015 where she learned Brazilian Portuguese and again immersed herself in the culture and art community. Along the way, she has traveled to 16 countries around the world and 30 states within the continental United States. Traveling inspires Lynette artistically and creatively, as she has met many wonderful people, visited many beautiful places around the world and shared the adventure alongside her husband of 18 years, Nick and their three children, Sage, Kaleb and Willow. "My work is a creative self-journey made from my soul to share with anyone who wants to look. I love to play with color, texture, and sculpture to create whatever it is that I am compelled to create, and share my own world and the way I see it." My favorite part of being a part of PWAT/Chesapeake team, besides getting to work with an amazing group of talented artists, is being able to watch people learn to paint something, sometimes for the first time ever, personalizing and playing with the paint on a canvas and to just have a good time in a relaxed, fun environment!